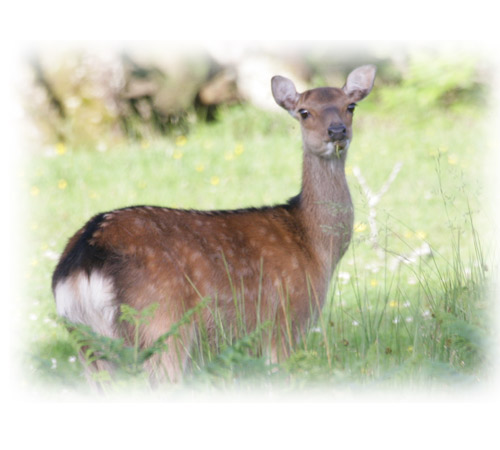 The aim of this guide is to provide information on aspects of the ecology and behaviour of sika deer to aid in the management of this species‡. A naturalised non-native species, imported from the Far East. Japanese sika (C. n. nippon) and Manchurian sika (C. n. mantchuricus) are the sub-species present in UK.

The sexes are generally segregated, coming together only during the rut. Females tend to occupy traditional home ranges, which in season also become the rutting ground for males. Individuals tend to stay within a 5 km radius of their home range, unless disturbed. Stags tend to move out into outlying areas and can travel substantial distances. Where sika colonise an area, they tend to dominate other deer species. Group size varies. Female groups are led by a dominant hind. Sika may hybridise with red deer to produce fertile offspring, particularly where both species meet at the edge of their ranges. Generally hybrids tend to be the result of sika males crossing with red hinds. Although first generation hybrids may be recognisable as having the appearance of both parents, subsequent crosses are difficult to assess which generally makes selective culling difficult. 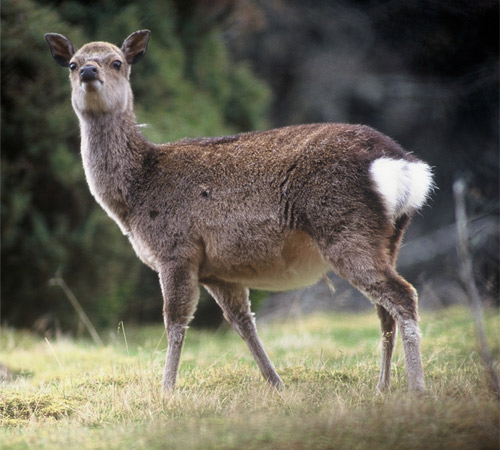 Although hardly visible head on, the erectile hairs of the caudal patch fan out to display a state of alarm to any other deer

Breeding
Single calf: Born late May and early June although calves born earlier are not uncommon. Twins are rare.
Productivity: Sika can produce and maintain high reproductive rates, even at high population densities. Most adult females will be pregnant. Some yearlings and occasionally well developed calves may also be pregnant.
Weaning of calves: At 4 months. Calves may continue to suckle beyond this period but are not dependent on milk. Behaviour: At the onset of calving, females seek cover in heavy scrub or forest. Hinds will tend to remain in this cover until the calf is capable of running at foot. Vocalisation: Hinds have a distinctive alarm peep. Hinds with calves whine and calves reply with a peep. 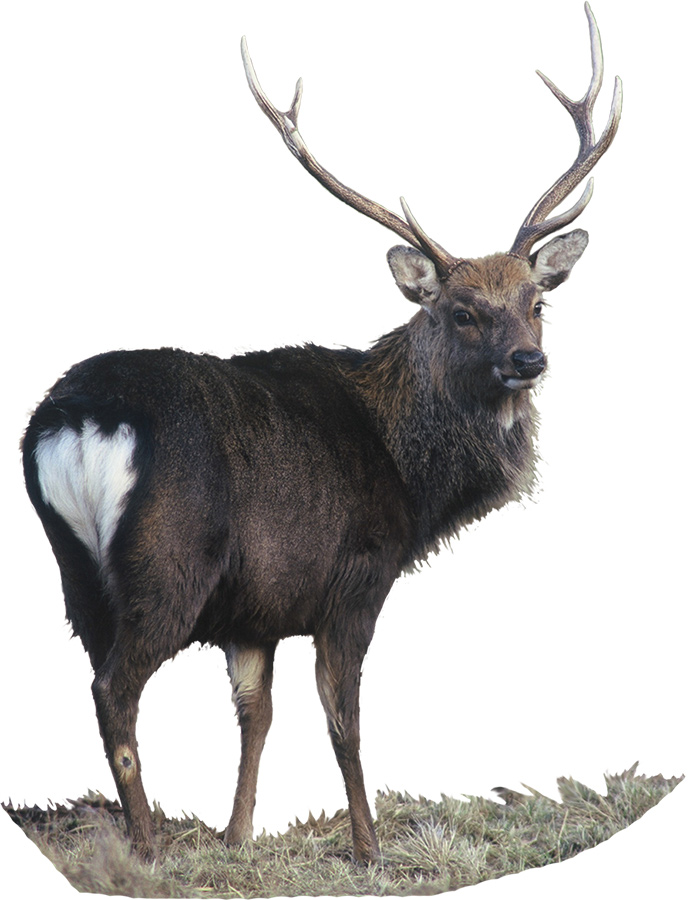 Stag in winter coat; dark-grey to black, spots faint or absent. Antlers in a mature stag are similar to red deer, but typically with six to eight points. note distinct white metatarsal gland

Mating
Mid Sep - end Oct: Rutting behaviour peaks. Stags form a hierarchy before and during the rut, with most fighting occurring between subordinate males. Stags defend a rutting territory but may also switch to harem-holding when a group of hinds has been assembled or hind density is high.
Nov – Dec: Some males may continue to vocalise and breed.
Vocalisation: Stags have a varied range of vocalisations during rut (examples include a ‘triple- whistle’). Hybrid stags may incorporate a mixture of sika and red-like vocalisations. The alarm call of a stag may be a high-pitched bark.

Social Dependency:
Female calves frequently remain with their mother as yearlings, inheriting her social status and learning her home range during this period. Social groups of a hind, her calf, and yearling are common. 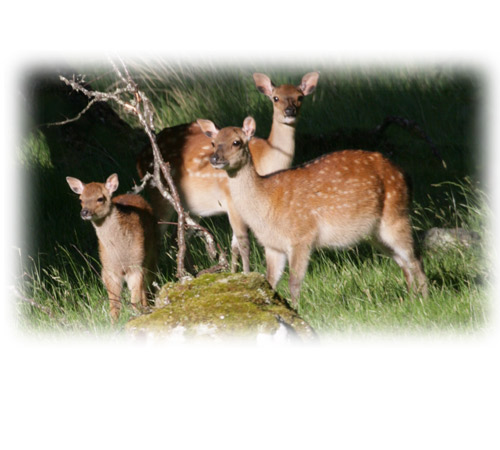 Up to about five months of age sika calves can be identified by their size. However, they grow so fast that thereafter they are less easily recognised

Winter: Sika are better able than other deer species to maintain body condition throughout the winter, especially in habitats that are in poor condition or less fertile. This may help to explain why sika hinds tend to be more productive than other species of deer in woodland habitats.
Spring: Deer start to regain condition having benefited from spring flush of vegetation.
Summer: The body condition of males peaks in August. This is often a difficult time to stalk stags as they become less visible, tending to seek secure, solitary areas in dense cover in which to feed
Autumn: Females peak in body condition during October. Active males may lose condition during the rut.

Sika tend to thrive in most habitat types but, particularly well-established deciduous and mixed woodland, offering dense concealing cover. Pine and Sitka Spruce forests, larch with boggy ground and heather habitats all suit them. While there is no evidence that sika cause more damage to trees than other species through browsing and bark stripping, damage by ‘bole scoring’ is specific to sika.

Sika have a diverse diet, feeding mainly on grasses and dwarf shrubs such as heather, but also items such as mushrooms, lichens, coniferous tree shoots and tree bark. Sika will also make use of food sources such as those offered by neighbouring farms and moorland.

Generally sika are crepuscular in their movement patterns, visiting feeding areas at dawn and dusk. Sika commonly graze nocturnally under the cover of darkness. The opportunity for encountering sika significantly increases at first and last light when they are moving to and from feeding areas.

Seasonally, sika move less than red, and do not congregate on wintering grounds in the same way as red.

Compared to other species, sika are less affected by inclement weather.

Sika are generally unpredictable and inquisitive in their behaviour towards humans, although they tend to react quickly on the first suspicion of danger by fleeing. 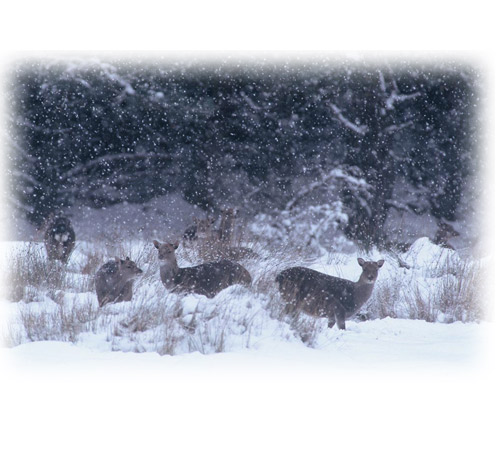 Bark stripping damage (see woodland damage recognition of cause ) : often increases as the sap rises in mature trees.
Fraying damage associated with stags cleaning velvet occurs during August and September.
Bole scoring (gouging with the antlers) of plantation trees can occur throughout the period stags are in hard antler.