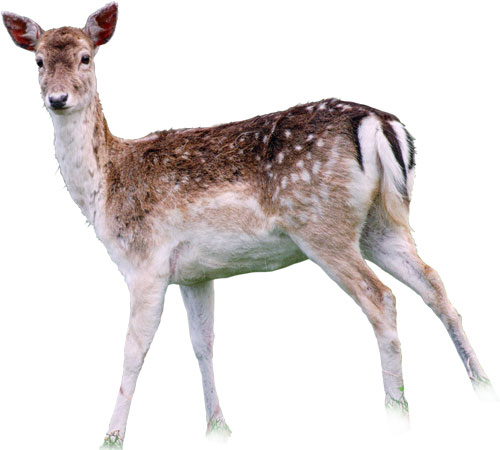 The aim of this guide is to provide information on aspects of the ecology and behaviour of fallow deer to aid in the management of this species.‡ Fallow are a naturalised non-indigenous species, having been introduced to Britain in the middle ages.

The size of groups and the degree of sexual segregation will depend on population density and habitat. In woodland, for most of the year bucks and does generally remain in separate single-sex herds, grouping together from October to December on traditional rutting stands. In agricultural habitats, however, bucks and does may mix freely throughout the year.

Large bucks may stop feeding completely during the rut and will lose condition as a result, whereas younger bucks hanging around on the fringes will continue to eat as normal.

Breeding
Single fawn: Born during June and the first week of July. Exceptionally twins born..
Productivity: In favourable areas most yearling does breed. A fawn produced annually thereafter.
Weaning: Of fawns at 4 months. Fawns may continue to suckle beyond this period but are not dependent on milk.
Behaviour: Hinds break away from single-sex herds to give birth. During the first month or so the fawn will be left alone, the mother returning periodically to feed it, until the fawn can follow the herd.
Vocalisation: With fallow the doe is the more vocal of the sexes. Does with fawns give a short bark as an alarm call. She will also use a variety of squeaks and bleats to communicate with her fawn throughout the year.
Shoulder height: 73 - 91 cm 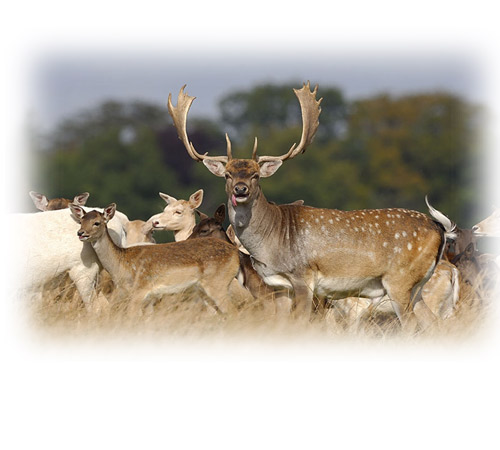 From about 3 years old, bucks grow flattened palmate antlers which increase in size with age, up to 70 cm in length. Note the range of coat colour variation within the herd.

Antler development
Fallow are the only British deer with palmate antlers in mature bucks.
End Apr: Mature, well-conditioned bucks cast antlers.
May – Jun: Yearling bucks (prickets) cast.
Aug: Mature bucks are first to clean velvet from antlers.
End Sept: All bucks, including prickets, should be clean of velvet.
Mating
Bucks may display a variety of rutting behaviour. Bucks may defend a rutting stand which is used to attract females and which is marked out by thrashing trees, wallowing and scrape marking. Bucks advertise their presence by constantly moving around in the area of the stand whilst groaning. The same rutting stands may be used each year. Alternatively, in areas with high numbers of females, bucks may go in search of groups of does or they may congregate with other bucks at leks.
Shoulder height: 84-94 cm. 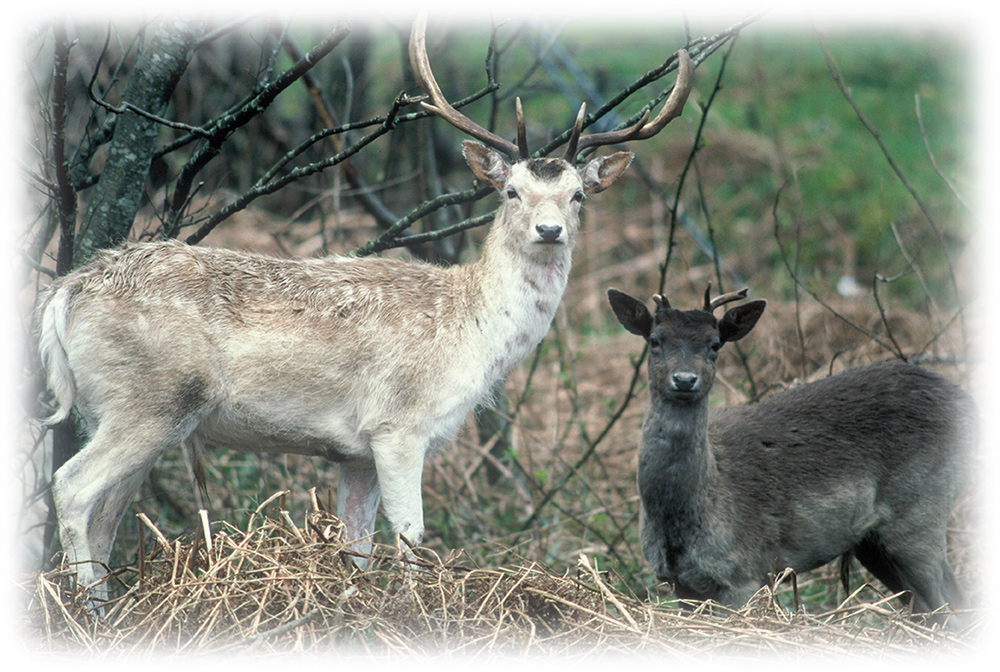 Fallow are generally not territorial but have a ‘home range’. Within the home range will be areas that are more frequented than others and associated paths will become apparent. Fallow prefer deciduous or mixed woodlands with a well-established understorey. They can also utilise moorland around the woodland fringe. Herds frequently forage from woodlands onto agricultural land. Some populations thrive in habitats predominated by agricultural land but incorporating small woods and copses.

Fawn with menil coat colour. Social Dependency: fawns frequently remain with their mother as yearlings, learning her home range during this period.

Preferential grazers of grasses and herbs although trees and dwarf shrub shoots (e.g. heather, conifer, holly and bramble) will be taken during autumn and winter. During the autumn acorns, fruits, nuts and fungi also make up their diet.

Fallow are most active at dawn and dusk but frequent disturbance may result in deer making more use of open spaces during the night. In between feeding bouts, fallow lie up in some undisturbed place to ruminate and chew the cud.

Fallow do not like strong winds or driving rain and will seek shelter. If the sun appears following periods of heavy rain they tend to move back out into the open.
During periods of prolonged snow cover, fallow become more restricted to sheltered woodland offering good browse and hardwood bark. During a thaw affecting snow-laden conifer woodlands, fallow often move out into the open to avoid the dripping trees. During extended periods of hard frost, fallow tend to feed on areas benefiting from the sun’s heat. This frequently results in increased movement during the warmest parts of the day.

Deer quickly learn to recognise and respond to human behaviour and sounds that they associate with danger.
Fallow are generally extremely wary and are suspicious of strange objects or changes within their surroundings.

Browse damage to trees (see Woodland damage recognition of cause ) and shrubs may increase during spring and early summer.
Fallow may damage growing cereal crops.
Some fraying damage may occur at rutting stands.
Fallow can and do damage root crops during the autumn and early winter.