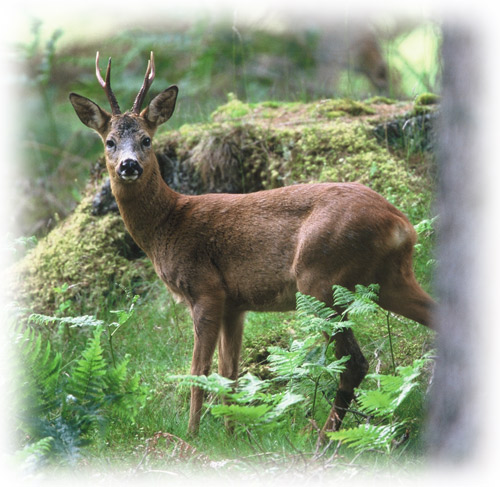 buck in summer coat: reddish-brown. Bucks have short (<30 cm) antlers with 3 points or tines on each

The aim of this guide is to provide information on aspects of the ecology and behaviour of roe deer to aid in the management of this species.‡ Roe deer are a truly native species.

Roe are normally seen in loose family groups or as single animals. Bucks are mostly solitary whereas does will be accompanied by kids most of the year. May form small groups over winter and early spring.

Habitat and range
Woodlands or farmland providing permanent cover are preferred but roe are increasingly found on open moorland and in urban /suburban areas. Females occupy small (< 0.5 km2) distinct areas which may overlap. 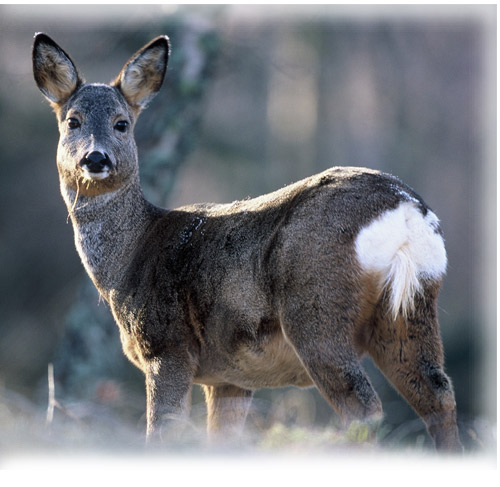 Delayed implantation: After fertilisation the embryo travels to the uterus but remains unattached and develops only very slowly for 5 months (this stage is known as delayed implantation or embryonic diapause). It is not until late December or early January that the embryo is implanted in the uterine wall and rapid foetal development begins. Roe deer are the only species of deer to exhibit this trait.

Corpora lutea: During the delayed implantation stage, a corpus luteum is left behind in the ovaries, one for each egg shed. This is a few millimetres in diameter and provides the embryo with nutrients to maintain the pregnancy. The corpora lutea in a female where the eggs have failed to be fertilised remain active for a period of at least 5 months (the same length of time as delayed implantation).
One to two kids: generally kids born in the last week of May and first week of June, however, early/late births not uncommon. Triplets unusual.
Productivity: Does are generally sexually mature by 14 months (the same age as bucks). Pregnancy rate in adult does can approach 100%.
Weaning of kids: After 4 months. Kids may continue to suckle beyond this period but are not dependent on milk.
Behaviour: Does chase out previous year’s kid(s) a couple of weeks prior to giving birth. During the first two months, longer than for fallow or red offspring, kids lie inert and hidden some distance from the feeding mother, relying on concealment and camouflage.

Vocalisation: Both sexes may bark as an alarm call throughout the year. Does communicate to kids using ‘pheeps’ and squeaks and make a high-pitched piping call to advertise their readiness to mate.
Shoulder height: 63-69 cm 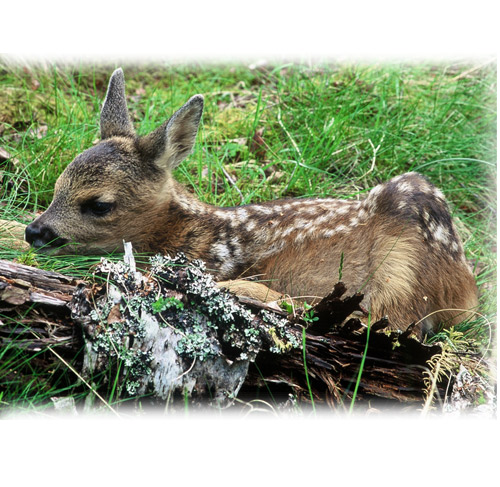 Kids are spotted at birth but will lose these in their first year.

Roe are generally crepuscular i.e. they feed mostly at dawn and dusk and, as a result, in concealing habitat the possibility of encountering significantly increases at first and last light when they tend to be most active. Long periods may be spent ‘lying up’ between feeding bouts.

Apr to Jun: Both sexes making use of spring flushes of vegetation for feeding. Bucks are active setting-up and defending territories. This is the most productive time for culling bucks.
Jul/Aug: Bucks are rutting and more likely to respond to use of a call but are often difficult to see due to concealing ground cover.
Sep/Oct: Feeding activity often increases however roe are still difficult to see due to concealing cover.
Nov—Mar: Feeding activity generally decreases due to a reduced metabolic rate. Deer may refrain from feeding for longer periods than normal but if disturbed then food will be required to replenish expended energy.
Jan—Mar: Often the most productive months for culling does. During the non-territorial period mixed-sex groups or ‘bevvies’ (up to 30 individuals) can be found sharing a limited food resource.

Roe are particularly sensitive to cold winds and the wet, often seeking shelter from heavy rain. On hot days roe are less active. However, after heavy rain or during periods of hard frost they tend to move out in the open into the sun to dry or to feed. This can increase the possibility of encountering deer during the day. After heavy snowfall deer often lie up for a day or two but may move out of conifer woodlands during a thaw to avoid dripping trees.

When frequently disturbed, roe may become increasingly nocturnal, making more use of open spaces during the hours of darkness. 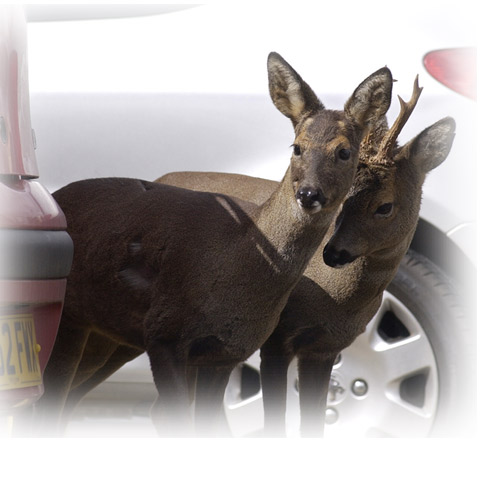 Roe deer are extremely adaptable and increasingly found in urban/sub-urban areas where they may utilise small areas of shelter (e.g. hedgerows, gardens, shelter-belts and copses).

Antler development
Nov – Dec: Bucks cast antlers.
Dec – Jul: Antlers in velvet.
Jul: Velvet generally shed by late July. Well-conditioned, mature bucks may become clean as early as Feb. Poor-condition yearling bucks may not fully develop antlers during first 18 months. In cases the pedicle may be visible and velvet-covered throughout.
Mating
End Mar: Mature bucks begin to become territorial, maintaining exclusive territories around one or more does by fraying, scraping and scenting activity at the boundary of territories. Fights between bucks result in the winner taking over the loser’s territory or associated doe(s).
Mid July – mid Aug: Main rutting period.
Oct: A resurgence of rutting behaviour or a ‘false rut’ may occur but involves only a proportion of the adult population.
Vocalisation: As well as barking as an alarm call, bucks may vocalise while courting.
Shoulder height: 66-72 cm.

Social Dependency
During the winter and early spring, kids learn from their mother’s feeding preferences, habitat use and defence strategies. Yearling kids become totally independent after they are chased out of their mother’s home range.