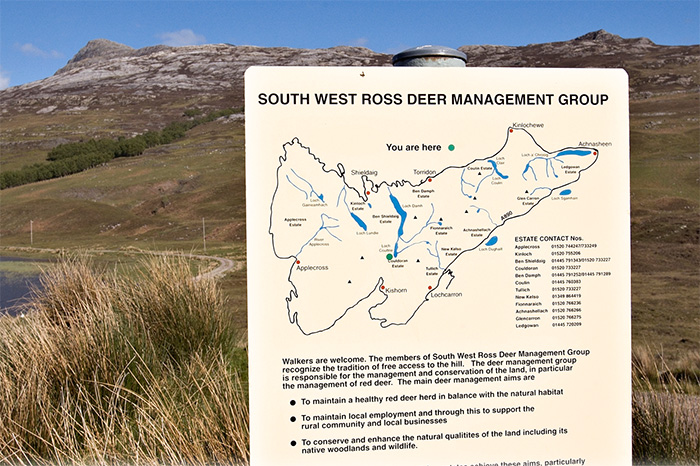 The aim of this guide is to provide guidance on the use of signage to manage public access and to provide templates for signage that have been approved by the stalking sub-group of the National Access Forum1.

Many estates already participate in the Hillphones scheme which gives advance notification to walkers and climbers of stalking intentions. This builds on the principle that the sooner people can take stalking activity into account, the less disruption there is likely to be.

A new online version of Heading for the Scottish Hills is to be produced, allowing estates to update information on a daily basis, or to provide longer term information and contact details. It is hoped that this will become a major resource for those planning to go walking or climbing and is likely to be a major route of communication between stalkers and walkers.

Circumstances vary considerably between estates and no one form of words will necessarily suit all situations. The two examples shown were developed by the National Access Forum stalking sub-group to be suitable for a wide range of situations. 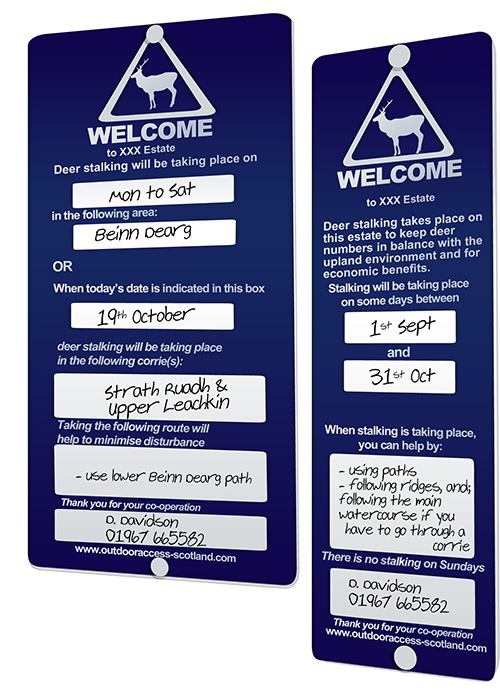 Much can be undertaken to assist access takers to reduce their unintentional impacts. Although access can be taken anywhere, often the recognised routes are not clearly signposted.

If the established or preferred route is clearly marked many access takers will willingly follow that route, especially if junctions, unexpected changes of direction or deviations occur. Care must be taken to ensure that the route marked is the exact route recorded.

A little effort to make the recognised routes easily passable will also lead to more people staying on that route. Tracks, fords, styles, gates and paths that are on the preferred route will be used if they are fit for purpose. Eroded, broken or dysfunctional access routes will lead to straying, climbing or detouring which will cause disturbance, nuisance, increased cost and risk of damage or injury.

1 The National Access Forum, and associated sub-groups, have been established by SNH to assist with implementation of the access rights. This body brings together all relevant interests and has a broad advisory role. For more information see www.outdooraccess-scotland.com
Outdoor Access