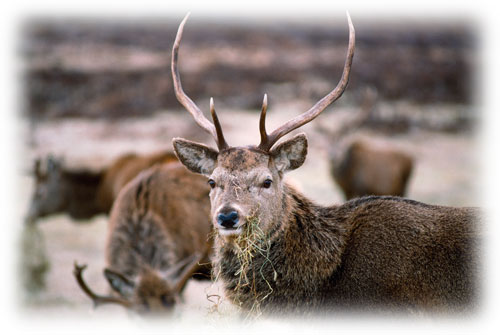 The aim of this guide is to provide information on the effectiveness and possible disadvantages of using supplementary / diversionary feeding as a management tool.

Traditionally feeding has been carried out to achieve some or all of the following management objectives:

The effectiveness or cost-effectiveness of feeding is difficult to gauge. Evidence from studies of the effects of feeding is either inconclusive or contradictory (see below). Feeding is also likely to be a time-consuming and expensive undertaking.
Anecdotal evidence suggests that by using feed to encourage stags to new wintering grounds in non-sensitive areas, impacts can be diverted away from more vulnerable areas. Generally, however, it is considered that feeding is of little benefit to open range populations of wild red deer in Scotland.
The decision as to whether to use supplementary/diversionary feeding should therefore be approached with caution as the potential disadvantages may outweigh any perceived advantage.

Where deer are provided with feeding and their behaviour is affected as a result, a greater moral responsibility for their welfare may be assumed.*

Food Hygiene Regulations require that any feedstuff supplements provided to wild deer destined for human consumption must be recorded and this information passed on to the final processor. Venison marketing relies on the reputation of venison as a wild, natural product. Practitioners should give consideration to the risks to this reputation if providing feed to wild deer.

As an alternative to providing feed, practitioners should consider providing additional natural forage and shelter through effective habitat management. This may be done by:

Where burning is considered, only small areas should be treated at any time and the Muirburn Code should be followed.2

The feeding of mineral or urea blocks (such as Rumevite) may be considered. Their purpose is to increase the digestibility of what natural forage is available overwinter, so increasing the nutritional value derived from it. As such they may have some benefit in refocusing deer activity or maintaining higher condition. As blocks are small, portable, can be distributed over a very wide area among natural forage and do not in themselves constitute a direct food source, they suffer few of the disadvantages of feeding at regular feed sites.

If making the decision to stop feeding, a number of factors should be taken into consideration:

Ideally therefore, feeding should be withdrawn gradually over a period of some years by reducing the amount of food provided and by spreading the feed over a number of sites.

The effects of feeding have been studied in the UK and abroad. Evidence from these studies is summarised below. However, it should be noted that these are the effects (or non-effects) of feeding at extremely high levels (i.e. approaching 80% of maintenance or more). Most of the feeding taking place for red deer in the open range is likely to be offered at lower levels.

There are a number of possible disadvantages associated with feeding.

For those wishing to undertake feeding, the following should be considered: