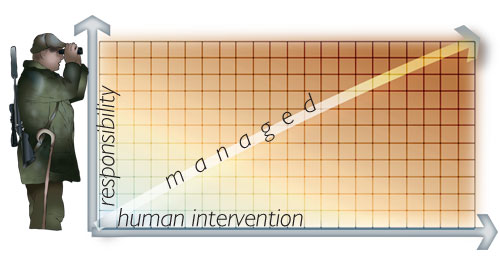 As the degree of human intervention in a wild deer population increases, should the responsibility for that population also increase?

where there may be welfare implications for deer. In general, these relate to the welfare of individual deer.
This guide provides a definition of welfare and examines both legal and wider responsibilities in relation to wild deer. The guide further describes the principles that should be applied when considering the welfare of free living wild deer at both the individual and wider population level.

Human perceptions of welfare as it relates to animals is a combination of science and ethical or moral beliefs. Society’s attitudes to animals are not static and it is important that deer management remains abreast of evolving scientific, ethical and moral considerations and perceptions.
While there is ongoing debate about welfare definitions and where exactly responsibilities for wild deer welfare lie, current thinking is the following:

As with all mammals, deer can experience pain, fear, hunger and other stressful states. At an individual level their welfare can be assessed from observations of:

Welfare in relation to BPG in wild deer in the wider population level can similarly be defined as concern for the physical and mental well-being of the population.

The Animal Welfare (Scotland) Act 2006 only applies to wild animals which are under the permanent or temporary control of man, so although this Act applies to captive deer there is normally no legal responsibility for those who manage free-living wild deer to ensure that their welfare is considered. Similarly, there is no legal responsibility for those who do not manage deer on their land in relation to any welfare issues that may arise.
Under the Deer (Scotland) Act 1996, Scottish Natural Heritage (SNH) is responsible for keeping the welfare of free-ranging deer of all species under review , although SNH has no specific legal powers to take action on welfare grounds.
Specific acts of ‘cruelty’ are covered by other legislation:

Outwith legal responsibilities, current thinking is that with increasing intervention (e.g. culling, feeding, fencing) comes increasing responsibility for the welfare of wild deer populations (see fig.1).
Aspiring to follow Best Practice guidance owners, occupiers/ managers and deer managers should be concerned about how their actions impact on the physical and mental well-being of deer and should aim to:

The following illustrated example describes how the principles outlined in this guide might be applied.
In this example a proposed fenced Woodland Grant Scheme would lead to the removal of an area of ground. An assessment of the welfare implications for deer affected will require information on counts, on deer distribution and an assessment of whether a compensatory cull should be carried out. 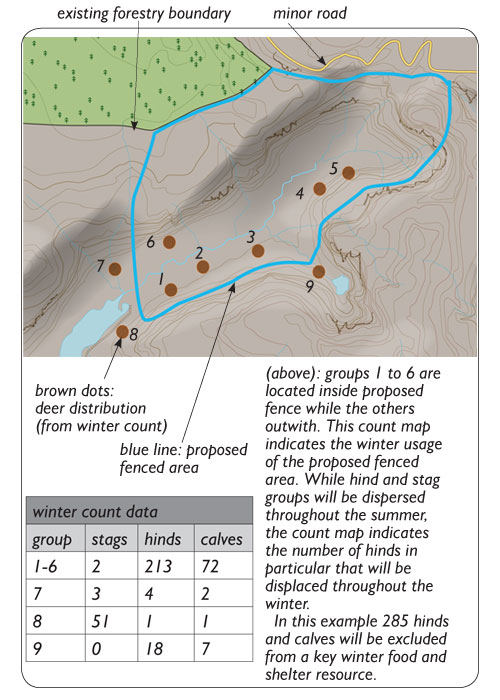 Any compensatory cull assessment should take into account a number of key factors including whether it is predominantly hind or stag ground that is proposed to be removed from the deer range. See Compensatory culls
In this example, the area being fenced off is heavily utilised by hefted hinds. The implications for the welfare of hefted hinds is considered to be more serious than for stags, given that stags might have an alternative. The level of compensatory cull should therefore reflect the risk to hinds, which may be considerable.

1 There are exceptions to this legislation which allow dogs under control to be used to stalk or flush from cover a mammal for certain purposes. In the context of deer, this includes purposes relating to deer management and sport shooting. For details of these exceptions see BPG Use of Dogs