The aim of this guide is to describe ‘notifiable’ diseases, for which there is a legal responsibility to act, and to outline what steps need to be taken if such a disease is suspected. This guide also aims to provide information on diagnosing and preventing infections in order to safeguard the health of humans, livestock, the wild deer population and other wild animals. 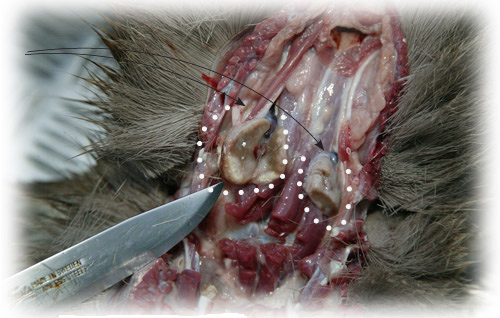 The following table describes the main ‘notifiable’ diseases , for which there is a legal responsibility to act.1

Confirmation of a Notifiable Disease in wild deer is unlikely to lead to legal restrictions on the management of wild deer, but it may be relevant to the control of domestic livestock or farmed deer in the area, so it is mandatory information for the Divisionary Veterinary Manager2

A small number of diseases are also transmissible to humans either through direct transmission (e.g. Bovine TB) or indirect transmission (e.g. Lyme disease from ticks).
Specifically in relation to Bovine TB, transmission to humans through eating venison from infected deer is very unlikely and there is no recorded case. The meat from infected animals can even be passed as ‘fit for human consumption’ (after the removal of the affected tissue) unless the carcass is generally emaciated. Those coming in contact with tuberculosis should consult their own doctor immediately.

Preventing introduction of disease from outside the UK

Stress (for example, malnutrition) can lower an individual’s ability to resist disease and parasites, and deer found in higher densities and concentrations are more likely to transmit and contract infectious diseases and parasites.

As Bovine Tuberculosis (bTB) is potentially a serious risk to livestock and may pose a threat to human health, the disease is notifiable. Wild deer can contract bTB. Fortunately, there is currently a low incidence of bTB in domestic livestock in Scotland. Only four cases of bovine TB in wild deer have been recorded since 1989.
The symptoms and signs for bTB overlap with two related diseases which can also be contracted: Avian Tuberculosis (aTB) (Mycobacterium avium avium) and Johne’s disease (Mycobacterium avium paratuberculosis). aTB and Johne’s disease (not notifiable) are more commonly found in wild deer.
Lesions of bTB are indistinguishable from those of aTB. The two infections can only be separated by culturing the bacteria from lesions in the laboratory and characterising their DNA. This usually takes at least 6 weeks.

Chronic Wasting Disease (CWD) has been reported in several deer species in the USA. Although not strictly listed as a Notifiable Disease, CWD is a member of a group of transmissible spongiform encephalopathies (TSEs) to which scrapie of sheep and bovine spongiform encephalopathy (which is a Notifiable Disease) belong. TSEs have not been diagnosed in British deer although Europe wide surveillance is in place.

Foot and Mouth Disease (FMD): experimental work has demonstrated that red, fallow, roe and sika can all contract FMD. During the 2001 and 2007 epidemics no deer were confirmed to have had FMD despite very close contact with infected cattle and sheep.

Bluetongue and Epizootic Haemorrhagic Disease (EHD): Epizootic haemorrhagic disease which affects deer is clinically and pathologically similar to Bluetongue. Both diseases are caused by a related but different virus. Bluetongue is now present in the UK having spread to livestock in England in 2007. Further spread of the disease will depend on environmental conditions allowing the virus to multiply in midges that transmit the disease. Although there have been a small number of cases of Bluetongue in deer in Europe, there have been no confirmed cases in deer in the UK. EHD has never been recorded in the UK.

1 A definitive list of the Notifiable Diseases which may affect deer is available . For contact details see BP Contacts

3 Note: these are only a guide and none, all or other symptoms may be displayed - if in doubt report