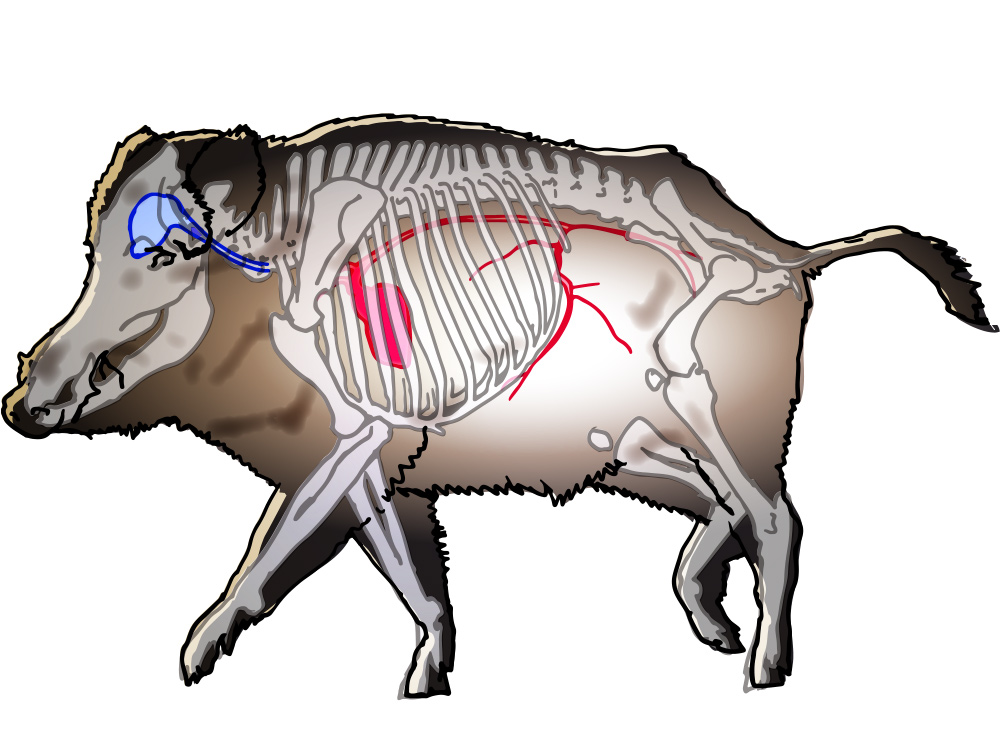 Red area of heart indicates aim point for a broadside chest shot. Blue area in the skull shows the position of the brain for a frontal shot

Shooting feral pig is likely to be one of the main methods of controlling their numbers. This guide describes how to shoot wild boar humanely and safely with due regard to meat hygiene standards. The other guides in this series, together with the firearms series of deer best practice guides1 should be considered as companion reading.

In much of Europe .30 calibre (or larger) rifles with at least 180 grain ammunition are considered necessary. In part this reflects the tradition of driven shooting in the continent. As driven is not an as of yet established technique in Scotland a rifle of not less than .270 Win calibre using an expanding bullet of not less than 150 grains should be considered the minimum for shooting feral pigs.
Changes to the conditions now applied to an individual’s firearms certificate (FAC) should not present a barrier to shooting feral pigs. If in any doubt contact Police Scotland.
A rifle, rather than a shotgun, is the firearm generally recommended for shooting wild boar.

Shotguns should be capable of holding 2 or more cartridges and a minimum of a 12 bore, ideally with 3inch or longer chambers. When using shot cartridges the shotgun should preferably be fully choked, using full loads of AAA or SSG shot. Smaller or larger shot are not recommended. Note that any cartridge containing less than 5 shot or any shot bigger than .36 inches in diameter (LG size) require a firearms certificate. Ranges should be kept to 25 yards or below.
If rifled slug is used it should be at least 350 grains in weight. A group size of 4 inches should be considered the maximum and will determine the maximum sensible range. Rifled slug ammunition can only be purchased on a firearms certificate, not on a shotgun certificate.
Firearms safety is subject to the same guidance as that given in deer best practice guidance.

A pig has two main vital zones, areas inside the body where a bullet will cause a rapid death. These are:

The heart and lungs (chest shot)

This is the preferred target area as it is by far the largest. The centre is just above the heart. From outside the animal, the aim point for an animal standing broadside is in a vertical line with the foreleg and 1/3 of the way up the body. If the nearside leg is forward this may avoid the bullet striking the leg before the chest, potentially resulting in a cleaner shot. For angled shots the aim point should be adapted to ensure that the bullet still passes through the heart area. Shots at more than 30 degrees either side of broadside should not be attempted.

The brain is located very high in the head roughly in line with front of the root of the ears. A shot to the brain is lethal but the brain is a very small target area and there is a higher risk of wounding than with a chest shot. For this reason head shots are not recommended. However, at close range a head shot from the front, preferably angled downwards into the body is the preferred method for humane dispatch. Larger pigs may have a significantly thickened skull and a head shot from the side could be considered. 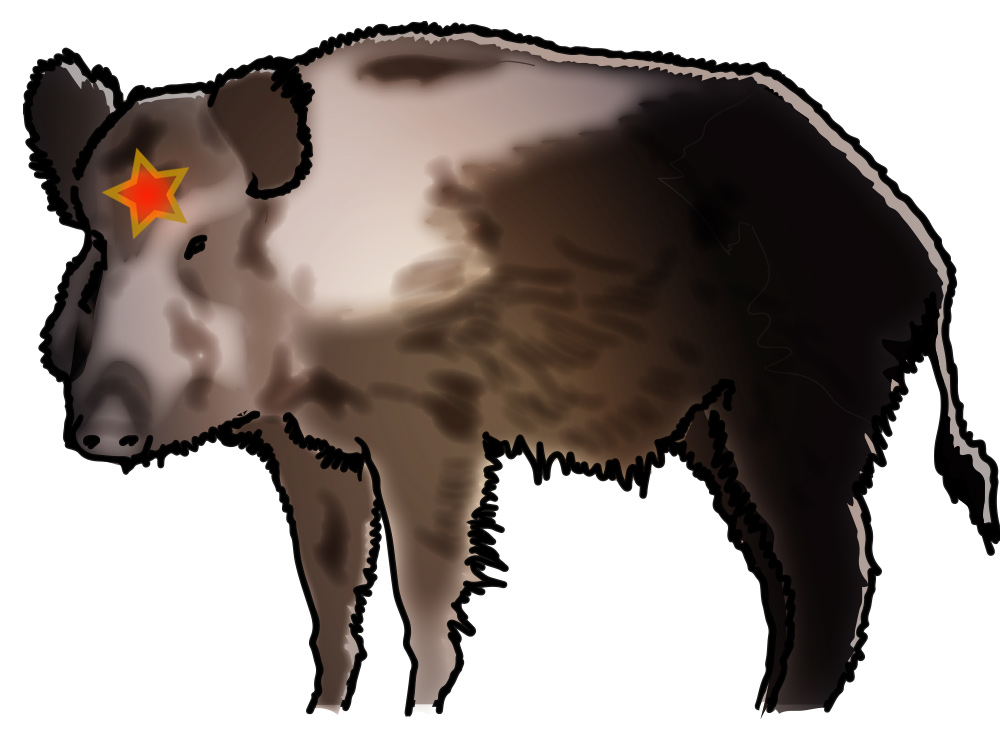 Pig are often shot from high seats, sometimes at short range and you should be aware of the trajectory of your bullet at shorter ranges and whether you have to adjust your point of aim.

Because of their nocturnal habits feral pig are often shot at night. This should only be attempted under bright moonlight or with spotlights using standard telescopic sights, or using image intensifying rifle sights in poorer light. Pig quickly become wary of spotlighting using artificial light.
Only rifles of the recommended calibre should be used and only from a stable shooting position such as a high seat.
The target and a safe background must be clearly identified before a shot is taken and safe shooting areas should have been thoroughly checked out in daylight beforehand.

Where the aim is to maintain or reduced population numbers it will be necessary to shoot female pigs since they are responsible for annual recruitment to the population. As far as is practicable the shooting of female boar known or suspected to have dependent young should be avoided. If circumstances require such a female boar to be shot, every reasonable effort should be made to kill any dependent young before, or immediately afterwards.

Artificial baits (usually maize) can be used to attract feral pigs to safe shooting areas. Because the productivity of breeding sows is heavily dependent on feeding conditions, amounts of bait used must be kept to a minimum to avoid artificially increasing breeding potential.
Baited sites also give an opportunity to monitor population size and can make selective culling easier. Baited sites should be shot infrequently as pig will quickly become wary of frequent use.
The extent to which feral pig will respond to baits will depend on a number of factors including the time of year, the natural food supply, the natural wariness of boar, and competition for the bait from non-target species.
Baits should not be placed in sites where attracting feral pig would aggravate pig damage or nuisance, or cause a danger to the public e.g. near roads.

Dogs can be used to flush or locate wild boar, to locate shot carcasses and to find injured boar. The use of dogs for these purposes is similar to the use if dogs for deer (see BPG Use of Dogs).
Because feral pig may injure dogs it is advisable to keep dogs on a leash unless the owner is certain that the dog is sufficiently experienced to avoid injury, or that it can be called to heel at any time. Protective body harnesses are available for dogs which are used to work with boar.

For humane dispatch of sick or injured feral pig a rifle of the calibre recommended above is preferred for stationary animals. Injured adult feral pig can be very unpredictable and even dangerous. It is recommended that two persons are present when following up injured adult pig, and that the leader carries a shotgun in case the boar runs. The other should carry a rifle. Both firearms should be ready for use but in a safe condition.
If possible the approach should be made from the rear and from downwind.
It is advisable to shoot from a safe distance i.e. not less than 5 metres, with a rifle or rifled slug, rather than approach too closely. At very close quarters or in confined spaces a shotgun using AAA or larger shot may be more convenient. If a shotgun has to be used on a running pig the distance should be no more than 25 metres with the chest as the aim point.
For static targets at close range the preferred point of aim should be the head, otherwise the chest.
A safe background for shooting is essential in all cases.